This article will provide you with a necessary understanding of the fundamentals of the structure of hair and will be the basis for much of what will be discussed in this series. I know you're tempted to skip this topic but, I think it's well worth the read. Having this understanding will help you to judge some of the information floating around the internet regarding hair growth and also help you make informed hair care decisions for your personal hair care and growth regimen. 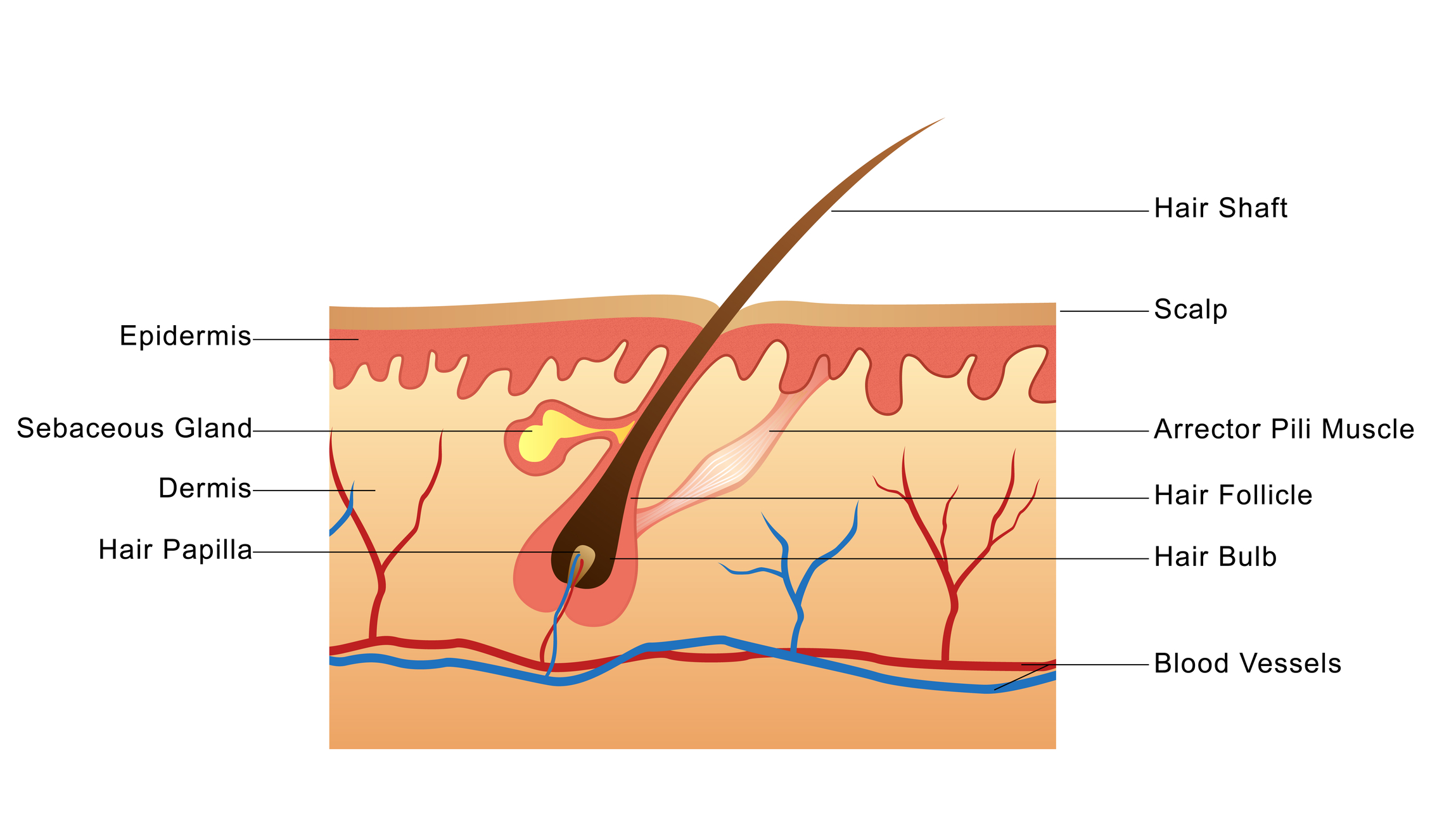 Hair has two distinct structures - first, the follicle itself, which resides in the skin, and second, the shaft, which is what is visible above the scalp.

The hair follicle is a tunnel-like segment of the epidermis that extends down into the dermis. The structure contains several layers that all have separate functions. At the base of the follicle is the papilla, which contains capillaries, or tiny blood vessels that nourish the cells. The living part of the hair is the very bottom part surrounding the papilla, called the bulb. The cells of the bulb divide every 23 to 72 hours, remarkably faster than any other cell in the body.

Two sheaths, an inner and outer sheath, surround the follicle. These structures protect and form the growing hair shaft. The inner sheath follows the hair shaft and ends below the opening of a sebaceous (oil) gland, and sometimes an apocrine (scent) gland, as is the case of the armpit. The outer sheath continues all the way up to the gland. A muscle called an arrector pili muscle attaches below the gland to a fibrous layer around the outer sheath. When this muscle contracts, it causes the hair to stand up which also causes the sebaceous gland to secrete oil.

The sebaceous gland is vital because it produces sebum, which conditions the hair and skin. After puberty our body produces more sebum but as we age we begin to make less sebum. Women have far less sebum production than men do as they age.

The hair shaft is made of a hard protein called keratin and is made in three layers, the medulla, the cuticle and the cortex. This protein is actually dead, so the hair that you see is not a living structure.

The inner layer is the medulla. It is made up of round cells that are the marrow of the shaft and are frequently not found in hair that is very fine. The medulla, along with the cortex, contains the pigmentation, which gives the hair its natural color.

The second layer, which makes up the majority of the hair shaft, is the cortex. It is made up of elongated cells that provide strength and flexibility. And again, the cortex also contains the pigmentation, which give the hair its natural color.

And, the outermost layer is the cuticle. This layer is composed of complex, interlocking scalelike cells. Think of the shingles on a roof. These cells can be stimulated to be raised, allowing for the absorption of moisture, or closed to seal in moisture. The opening and closing of the cuticles can be manipulated by temperature and pH levels, which we’ll discuss later. But for now, it’s important to know that when damage is done to the hair, it’s usually the cuticle layer that has been damaged. Chemicals, heat and improper care of the hair often leads to broken or missing cuticles, which can lead to porosity issues. Again, we’ll cover that later. The cuticle layer will be an important part of our healthy growth regimen as it greatly impact length retention. 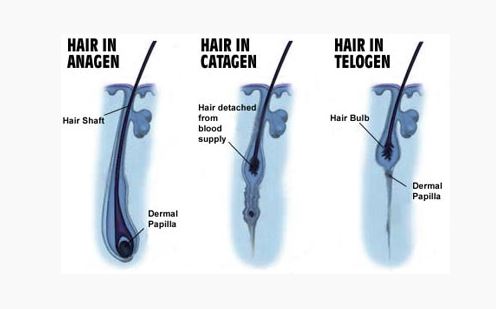 It is said that the hair on the scalp grows about .3 to .4 mm/day or about 6 inches per year. Unlike other mammals, human hair growth and shedding is random and not seasonal or cyclical. At any given time, a random number of hairs will be in one of three stages of growth and shedding: anagen, catagen, and telogen.

Anagen is the active growing phase of the hair. The cells in the root of the hair are dividing rapidly. A new hair is formed and pushes the club hair (a hair that has stopped growing or is no longer in the anagen phase) up the follicle and eventually out.

During this phase the hair grows about 1 cm every 28 days. Scalp hair stays in this active phase of growth for two to six years.

Some people have difficulty growing their hair beyond a certain length because they have a short active phase of growth. On the other hand, people with very long hair have a long active phase of growth (we’ll discuss extending this phase later). The hair on the arms, legs, eyelashes, and eyebrows have a very short active growth phase of about 30 to 45 days, explaining why they are so much shorter than scalp hair.

The catagen phase is a transitional stage and about 3% of all hairs are in this phase at any time. This phase lasts for about two to three weeks. Growth stops and the outer root sheath shrinks and attaches to the root of the hair. This is the formation of what is known as a club hair.

Telogen is the resting phase and usually accounts for 6% to 8% of all hairs. This phase lasts for about 100 days for hairs on the scalp and longer for hairs on the eyebrow, eyelash, arm, and leg. During this phase, the hair follicle is completely at rest and the club hair is completely formed. Pulling out a hair in this phase will reveal a solid, hard, dry, white material at the root. This is also the phase when hair will shed in preparation of the oncoming anagen phase.  About 25 to 100 telogen hairs are shed normally each day.